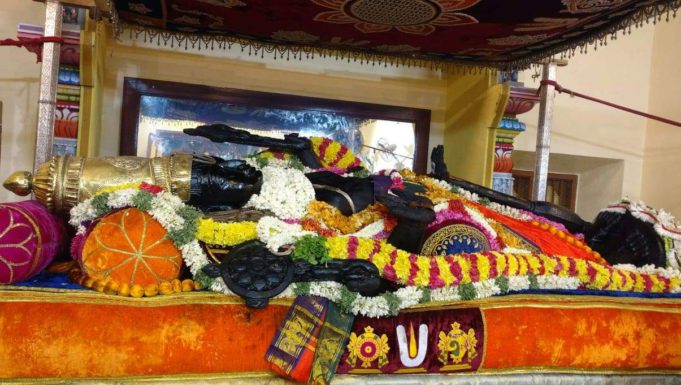 Kancheepuram, NFAPost: Despite heavy rains that are lashing Kancheepuram in the evenings, the temple town near Chennai, thousands of devotees patiently wait in a queue to have a darshan of the Athi Varadar deity, after a gap of 40 years, at the Varadaraja Perumal Temple.

From the first day, there has been a surge in the number of devotees visiting the temple. Every day, at least a lakh of people throng Kancheepuram, but the district administration is yet to provide basic amenities like toilets and drinking water.

There are only six bio-toilets (3 each for men and women) near the East tower of the temple where people gather in huge numbers to enter the temple. 60-year-old Padmini from Chennai, who waited in the queue to have a darshan said, “It takes at least four hours to have a darshan and lucky are those who get to see the deity in less than two hours. The government should have anticipated a huge crowd and provided proper facilities.”

S Geetha, whose parents from Bengaluru visited the temple town recently said, “My parents had a tough time as they had to park the car at least 3 km away and walk till the East Tower side. Though wheel chairs are provided for senior citizens and there is a separate queue for the elderly and pregnant women, people are clueless as there are no boards to explain the same.

While the first 24 days, the deity is kept in a reclining position, the remaining days in a standing position. Till July 17, more than 20 lakh people have had a darshan. According to the Kancheepuram district administration, at least eight medical camps have been set up (4 inside and the rest outside) to facilitate devotees.

Apart from the East tower side, the West tower is open for VIP darshan, donor pass and those who book tickets online. K Shankar, resident of Kancheepuram said, though the administration is taking various steps, chaos still prevails. It is better to reach as early as 4.30 am to have a darshan as the temple authorities open the gate at 4.45 am.