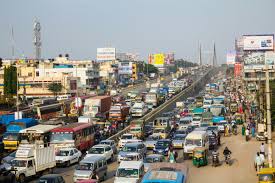 Chennai, NFAPost: How many of you have complained or wondered about the time spent in office commute alone? Well, what you are thinking is right, as a recent survey says that Indians spend 7% of their day in office commute.

On an average, office goers in India spend three minutes per kilometre on the road. While in Chennai, average one-way commute of 21 km takes 50 minutes, it takes 49 minutes for just 15 km in Bengaluru. ‘Travel Time Report Q1 2019 vs Q1 2018’ released by office commute platform, MoveInSync Technology Solutions, for six key cities in India, reveals that an average Indian spends 7% of their day in commuting to office averaging less than 3 minutes per kilometre.

According to the report, Chennai surprises as the fastest city with a speed of over 25 kilometre per hour, whereas, NCR and Hyderabad crawl at nearly 21 km, and Pune at 20 km.

Mumbai and Bengaluru were found to be the slowest moving cities with average speed no more than 19 km per hour. The average travel speed across the six cities indicates that India’s IT corridor inches at 24.6 km per hour.

The report says that the average journey speed in Indian cities is low, particularly in cities with high car volumes as infrastructure in these cities is not commensurate with the conditions for sustainable transport. While Mumbai is the most car-congested city in the country with 510 cars for every kilometre of road, it is followed by Pune with 359, Kolkata with 319, Chennai with 297, Bengaluru with 149, and Delhi with 108 cars.

Speaking about the report, Deepesh Agarwal, Co-Founder & CEO said, “In this report, we see that the average commute time has either increased or remained the same even if there has been a reduction in the average distance travelled to work. This can only be attributed to one thing and that is traffic congestion. A long commute time also hampers the productivity of an employee and as NITI AYOG has stated, the economic loss of congestion for India’s top 4 metros is estimated at $22 billion annually.”

Agarwal said that the governments at both the National and State-level have taken initiatives to strengthen the urban infrastructure and public transport system to address the twin challenges of pollution and congestion. “However, it is also in the interest of each one of us to take initiatives at our level or at an organisations’ level. From this report, we can see that an employee can save between 25 and 50 minutes a day by altering his or her office timing.”

Also, in the report it is said that Bengaluru experiences up to 22% faster commute time during Ugadi and 14% during Diwali and Christmas. Chennai saw a unique trend, during Holi and Christmas, the average kilometres travelled fell by 11% and 23%, respectively albeit with longer commute time. The month of August had the slowest commute time for Pune and Hyderabad.