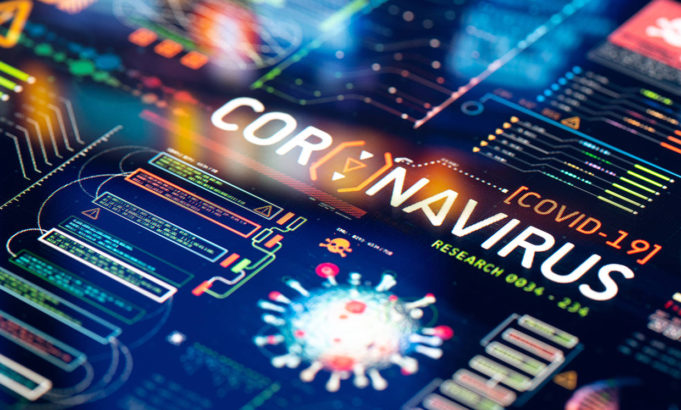 It is called as the Spike (S) Protein. The tiny mushroom like heads on the surface of the now infamous SARS-COV-2 virus. An appendage so small, that it is near impossible to see it without sophisticated electron microscopes. In pop culture, this would be the perfect antithesis of the term “Size does matter”.

In this teeny tiny world of viruses, a simple S-protein receptacle can wreak havoc to unassuming cells that are oblivious to the exchange of genetic material from the virus to the cell. A simple, potent and effective algorithm of the natural world that is so profound in its impact, that it can bring the mighty global healthcare systems to its knees. With it, the frenzy at the stock markets and the unprecedented government spending have rumbled the global economy.

As Sun Tzu wrote in the Art of War, “The supreme art of war is to subdue the enemy without fighting.” The virus does not fight to succeed. It just uses deception. A form of deception that is so effective, that it does not even result in symptoms for as long as fourteen days in affected humans. With its first discovery in late 2019 and spreading at a rate that is defined by the R0 (pronounced as R naught) value of the intensity of the virus, we now have a raging pandemic in 2020 that is threatening the very existence of humans on this planet.

The ramifications of the pandemic are multifold. As individuals, humanity has taken a hit at a psychological level and the society at large has suffered a lack of readiness and defense against this enemy that lurks in the shadows of the thorax.

If we use Abraham Maslow’s ‘Hierarchy of needs’ as a framework, we can start to understand the psychological impact of Covid-19 on people.  Maslow, in his 1943 paper “A Theory of Human Motivation” wrote about the hierarchy of needs. Imagine a pyramid of needs. At the bottom rung of the pyramid are needs that form the basis of our existence. Things like food, water and air to breathe. Next comes safety, followed by belongingness. Then comes esteem. Things like a feeling of accomplishment and finally we reach a state of self-actualization. A state where the full potential of a person is realized.

Covid-19 dug deep into people’s psychology. Many people had a feeling of helplessness. A state of mind that sank from the lofty levels of self-actualization and esteem, down to the bellows of safety.

But, why is this important? Well, as more and more people feel the weight of the pandemic, they shore up on resources that are existential. Toilet paper and Beer are the first to fly out of the store aisles. Governments resort to large scale lockdowns and impose austerity measures. Consumption drops led by a drop in discretionary spending. Eating-out stops. The daily commute stops. Flying and driving stops too. Unemployment leads to civic unrest. Society as we know it, is on ventilator support.

A promise of hope on the edge of frailty

Looking into the twilight of the hey-days and staring at the setting stars, humanity needs a light sabre with Jedi powers to fathom and conquer the impending long cold night of uncertainty. Turns out, we have one. Not one, not two but an army of troopers at our command…Technology.

Ever since the dawn of homo sapiens, humanity has been obsessed with technology. From the discovery of wheels and the use of metals, to the scripting the demise of death using stem cells and supercomputers, we have come a long way. Humans are more hopeful as a species today than we ever were in our collective history of over 200 thousand years.

Simply put, technology extends human abilities. The one crowning glory of 21st century’s technologies is perhaps the advent of Digital Engineering. It is the swiss-army-knife of possibilities that can be harnessed to accelerate human endeavors in ways which would otherwise be unimaginable. From gene sequencing to synthesizing new vaccines in record time, simulating the outcomes, transmitting results globally and searching for indexed information from across several millions of sources, the extremities of Digital possibilities is the hope that humanity has come to rely upon.

What this really brings to the global diaspora is access. Digital platforms, thanks to the relentless innovations and research, especially from the Big 5 companies from the Silicon Valley – Alphabet, Apple, Amazon, Facebook and Microsoft and also a host of other tech companies and start-ups globally, have given us the one leverage that can make a difference. Scale.

But then, how can all these extraordinary infrastructures of compute, storage and connectivity resonate into a power that can pull back humanity from the brink of global calamity? The answer lies in AI.

In January 2020, the BBC reported that Artificial intelligence-created medicine would be used on humans for the first time. That is a significant departure from the ways medicine was being developed around the world. It is happening and at scale.

That gets us to christening the new Digital. A Digital that far surpasses human ability. We can call it ‘Ai.Q.C.5’. Artificial Intelligence (AI) that can run on a Quantum Computer connected to a Hyperscale Cloud with 5G connectivity between users. In this fight for survival, in the impeding post Covid-19 era of mankind, we must learn to harness Ai.Q.C.5.

We have already knocked on the doors of quantum supremacy and are now looking at quantum advantage. We can now compute faster than thousands of the best supercomputers in the world. Hohhot in Mongolia houses some of the largest Datacenters in the world. At an average temperature of 6 Degrees Celsius annually, Hohhot has ideal conditions to cool the acres of blade servers in these hyperscale datacenters. At 10.7 million square feet, China Telecom’s Information Park in Hohhot is the biggest data center in the world.

The prevalence of Digital and its access across the population is simply astonishing. In a country like India, a decade ago, it would not have been possible to predict the sheer number of wireless connections that would come to rule the connected world. As things stand, in 2019, there were more than 1.17 billion wireless mobile connections in the country. A handy base to roll out statutory applications like India’s Aarogya Setu. Enter 5G and we will now have average download speeds of 1Gbps.

The need of the hour is therefore, not the creation of infrastructure for Digital to succeed. We already have them. It’s the human will to collaborate that needs to take center stage. It is for countries, organizations, companies and the collective will of people to take a high moral ground to invest in a Digital future. We must wield technology responsibly and with purpose so that we can usher ourselves towards a continuum of sustained prosperity.

The Covid-19 situation is just one use-case for mankind. It is a test to overcome the dogmas of divide. It is a test for the guardrails of mankind’s imminence. With a little help from technology, we can prevail.