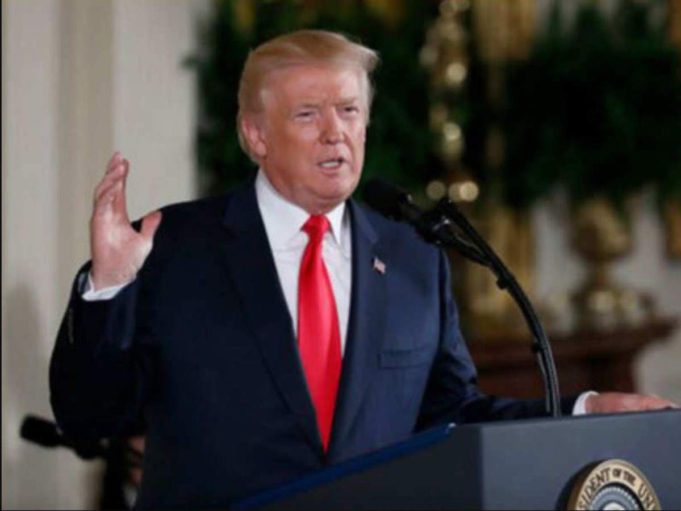 Bengaluru, NFAPost: Putting another bloody blow for the growth of Indian IT Industry, the US Congress led by President Donald Trump signed a proclamation Monday temporarily blocking the entry of foreign workers coming to the US on certain visas — including the sought-after H-1B visa for skilled workers — through the end of the year.

The proclamation which comes into effect on June 24 is the latest in Trump’s series of crackdowns on legal immigration during the coronavirus pandameic. The administration named the order as Proclamation Suspending Entry of Aliens Who Present a Risk to the U.S. Labor Market Following the Coronavirus Outbreak

According to analysts from Arvian Research, in addition to large number of Indian IT professionals, the proclamation is expected to impact several American and Indian companies who were issued H-1B visas by the US government for the fiscal year 2021 beginning October 1.

“Now there is no other option for these companies but rather wait till the year end of the current year before approaching the US administration for new application and renewing existing ones. It is going to affect large number of Indian IT professional who are already working and waiting for renewal,” said Arvian Research Director.

The US administration decision is likely to impact Indian companies such as TCS, Infosys, HCL Technologies, Wipro, among others as nearly 70% of the 85,000 visas issued each year are to Indians. Work visas such as H1-B and L1 are regularly used by Indian and multinational IT companies to hire Indian employees to work on US contracts in that country. TCS and Infosys exposure to H-1B visas is at 40%-50% while Wipro and HCL Tech’s at 30%-35%.

The proclamation would open up roughly 525,000 jobs for Americans but at the same time there is a concern whether the companies will have to capacity to find suitable candidates with necessary skill sets and experience to fill these vacancies.

Reacting to the suspension order, Google CEO Sundar Pichai tweeted, “Immigration has contributed immensely to America’s economic success, making it a global leader in tech, and also Google the company it is today. Disappointed by today’s proclamation – we’ll continue to stand with immigrants and work to expand opportunity for all.”

The proclamation suspends and limits entry into the US of H-1B, H-2B and L visas and their dependents till December 31, 2020. It also includes certain categories of J visas like an intern, trainee, teacher, camp counselor, or summer work travel programme.

The proclamation is widely viewed in the US as a populist “America first” approach to jobs will appease the anti-immigration har-liners and labour-friendly Americans as the country is witnessing 21 million working age adults in the country jobless in May. Adding bloody blow to the situation, Covid-19 further damaged the economic growth and job creation.

US President Donal Trump said in Proclamation 10014 of April 22, 2020 (Suspension of Entry of Immigrants Who Present a Risk to the United States Labor Market During the Economic Recovery Following the 2019 Novel Coronavirus Outbreak), he is determined that, without intervention, the United States faces a potentially protracted economic recovery with persistently high unemployment if labor supply outpaces labor demand.

“Consequently, I suspended, for a period of 60 days, the entry of aliens as immigrants, subject to certain exceptions.  As I noted, lawful permanent residents, once admitted pursuant to immigrant visas, are granted “open-market” employment authorization documents, allowing them immediate eligibility to compete for almost any job, in any sector of the economy.  Given that 60 days is an insufficient time period for the United States labor market, still stalled with partial social distancing measures, to rebalance, and given the lack of sufficient alternative means to protect unemployed Americans from the threat of competition for scarce jobs from new lawful permanent residents, the considerations present in Proclamation 10014 remain,” states the US President.

”During this same period, more than 20 million United States workers lost their jobs in key industries where employers are currently requesting H-1B and L workers to fill positions. Also, the May unemployment rate for young Americans, who compete with certain J non-immigrant visa applicants, has been particularly high — 29.9 per cent for 16-19 year olds, and 23.2 per cent for the 20-24 year old group,” he said.

There are a few key exceptions to the proclamation: It does not affect immigrants who are already in the US, existing visa holders, temporary workers in food production industries, and health care workers and researchers fighting Covid-19. But the restrictions would still impact hundreds of thousands of immigrants.

“Since travel is uncertain for the rest of this calendar year, this will not have much impact on indian IT! Further the massive use of tech has reduced the need for face to face interaction,” said Former Infosys CFO and Chairman of Aarin Capital & Manipal Global Education Services Mohandas Pai.

Expressing concern over the decision, Infosys Senior Vice PresidentMritunjay Singh Mritunjay tweeted that suspension of H1-B visa program is not a good thing for economy and people (both USA and India) in short term.

The measure also exempts food supply chain workers and people whose entry is deemed in the national interest. The suspension will include work-authorized J visas for cultural exchange opportunities, including camp counselors and au pairs, as well as visas for the spouses of H-1B workers.

Still, the proclamation might not immediately shift the status quo since many US consulates, which process visa applications for foreigners overseas, remain closed due to the pandemic. The closures have caused visa issuances to drop precipitously in recent months.

The Trump administration is also weighing a slew of additional changes to legal immigration via regulation. The official said the administration is finalising a rule that would deny work permits to asylum seekers who cross the US border without authorization. For asylum seekers who cannot afford to be unemployed and are not eligible for most public benefits, that means they would need to either give up their asylum claims in the US altogether or find under-the-table jobs in the shadow economy.

Trump is also planning to eliminate work permits for people who have been ordered deported or who have committed crimes in the US, which encompasses roughly 50,000 people per year, the official said.