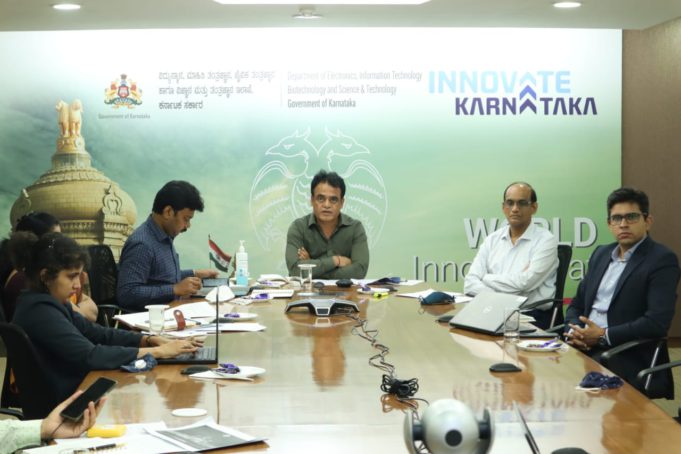 During the Video Conference with Japanese Embassy (New Delhi) Minister (Economic & Development) Shingo Miyamoto Shingo Miyamoto, and Counsellor at Embassy of Japan (New Delhi) Ryoji Furui the Deputy CM recalled the warm and trusted relationship between Japan and Karnataka in the fields of commerce and industry.

“It is our intention to continue this friendship in the future also. The Covid 19 pandemic is fully under control in Karnataka and there is no threat for anyone with regard to health or treatment issues,” the Deputy CM said reinforcing the fact that Japanese employees can boldly resume their works in the State.

The meeting assumes significance as there is a concerted effort from the Karnataka government to bring Japanese investment at a time when Japan decided to end its manufacturing dependency on China because of geopolitical issues. Besides giving incentives, Japanese government has decided to shift approximately 2000 industries from China.

“Post Covid-19, we have made significant changes in our healthcare system. Treatment is available everywhere and hospitals have been upgraded to global standards. Bengaluru is in the top when it comes to health sector. We are the health capital of India,” Deputy Chief Minister Dr C N Ashwath Narayan.

Already, one of the Japan’s wellk-nown hospitals Sakara is located in Bengaluru. “Japanese can avail the best medical facilities here,” he said.

Besides good healthcare facilities, there is a conducive atmosphere for investments in commerce and industry in Karnataka, stated Deputy Chief Minister Dr C N Ashwath Narayan.

“A Help Desk headed by Principal Secretary (Commerce and Industries) would be set up to expedite investment clearances. This has enhanced ease of doing business in Karnataka and it is further consolidated by the recent amendments to the Land Reforms Act enabling industries buy land directly from farmers,” said Deputy Chief Minister Dr C N Ashwath Narayan.

The deputy CM asked the Japanese Minister to invest in health sector. Healthcare sector is growing at a rapid pace in the country. In the previous year, it registered a growth of 35% to 45%.

“In Karnataka, there is an availability of expert medical doctors and skilled health workers. This makes the State very attractive for investment in the healthcare sector,” he said expressing hope that more and more Japanese pharma and health companies will invest in India.

In addition to the health sector, Deputy Chief Minister Dr C N Ashwath Narayan pointed that there is a big scope for investment in the state in semiconductor and APM for which several incentives are offered by the state government.

Expressing that a new era will begin between Japan and Karnataka in terms of investments in Commerce and Industries, Deputy Chief Minister Dr C N Ashwath Narayan said that Japanese people working in the various sector have had faith in the both their system as well the State government here.

Deputy Chief Minister Dr C N Ashwath Narayan said earlier everyone were looking at China when it came to the manufacturing sector and the situation has changed now.

“India is moving at a lightening speed and Karnataka is well prepared to stay ahead by facilitating required help for the manufacturing sector. Already Japan has made huge investments in the State. I hope it would increase by 100 fold in the coming days,” said Deputy Chief Minister Dr C N Ashwath Narayan.

According to Arvian Research, Karnataka has a total of 529 companies present and the majority of them are in Bengaluru. “Japan is going ahead with its investment plan in Kolar, Malur and Tumkuru. The Japanese companies along with the participation of the Japanese government, Central government and Karnataka government is coming up with Japanese Industrial Township at Vasantnarasapura in Tumkuru. The region is expected to bring more than $3 billion investment from Japan,” said Arvian Research Director.

Also, Japanese companies interest in the Indian startup ecosystem, especially in Bengaluru, is increasing as many venture capital and investors are putting money in these companies.

China Watching Huawei Row To Observe Modi’s Policy Towards It