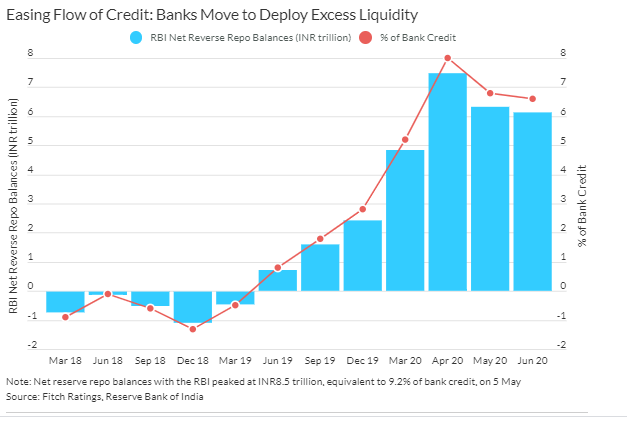 Chennai, NFAPost: India’s non-bank financial institutions (NBFI) will continue to face elevated near-term risks, even as economic activity picks up with the easing of the country’s nationwide lockdown, said Fitch Ratings. These risks revolve around liquidity and asset quality in particular and reflect the impact of the coronavirus pandemic on borrowers’ repayment capabilities, as well as the effects of the moratorium on collections.

The cash flow implications of the moratorium, which regulators have extended to end-August, have not been uniform across the industry, affecting some NBFIs liquidity profiles more materially and placing pressure on their ability to repay or refinance upcoming obligations.

“We expect near-term inflows to remain below pre-pandemic levels and to improve only gradually as economic activity gathers pace,” Fitch Ratings said.

The moratorium impact has varied across the different NBFI business models; among Fitch-rated issuers, IIFL Finance (B+/Rating Watch Negative (RWN)) and Shriram Transport Finance Company (BB/RWN) have had a higher proportion of collections affected by the moratorium than conventional gold lenders, such as Muthoot Finance (BB/RWN) and Manappuram (BB-/RWN).

“We believe the moratorium will erode payment discipline and its extension will result in lagged asset-quality problems for NBFIs, particularly when combined with the economic damage from the pandemic and lockdown; we expect India’s economy to contract by 5% in the financial year ending March 2021 (FY21),” Fitch Ratings said.

It added that asset quality indicators did not show significant deterioration in FY20, but regulatory guidance around impaired-asset recognition indicates that the true extent of the damage may only become visible in FY22. This lack of transparency will complicate the sector’s fund raising efforts.

The FY20 results do reveal that many of the sector’s largest competitors took proactive provisioning, but whether this was sufficient will depend on the extent of asset-quality deterioration in the coming months; we expect credit costs to be elevated over the medium-term, the rating agency said.

Interest spreads for NBFIs have narrowed since mid-May and funding conditions have begun to improve. The three-year India ‘AAA’ NBFI index spread over Indian government securities of the same maturity fell to 174bp on June 29, from 270bp on May 15. Nevertheless, except for short-term gold-backed loan providers, liquidity remains tight for most business models across the sector.

“We would regard equity raising as credit positive for NBFIs, but expect this to remain difficult in the near-term for all but the most established companies. Among the major NBFIs, Shriram Transport and Mahindra & Mahindra Financial Services have recently announced equity rights issues to be completed in the coming months,” the agency said.

Fitch maintains a RWN on its four rated issuers, largely due to the near-term refinancing risk, and a weaker asset-quality outlook. Fitch will be looking for greater certainty around near-term liquidity and refinancing risks, as well as the direction of economic activity, before resolving these Rating Watches.

Near-term liquidity coverage, including liquid assets and undrawn credit lines, remains adequate for Fitch-rated NBFIs. Leverage will be less of a near-term challenge barring unexpected capital impairment, as NBFIs are likely to have a cautious approach to new lending in FY21.

After Covid-19, Can India Become The World’s New Manufacturing Hub?