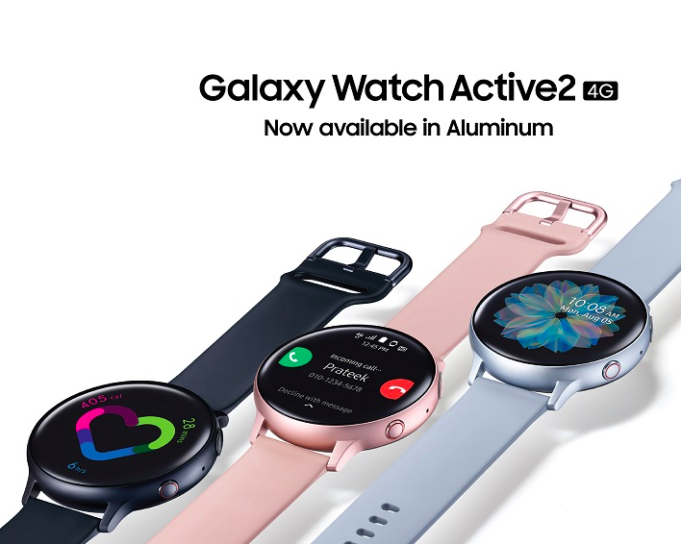 Mumbai, NFAPost: South Korean handset maker Samsung said that it is going ahead with its plan to manufacture all smartwatches in India, and has expanded its portfolio with the launch of Galaxy Watch Active2 4G Aluminium edition.

The company decision comes at a time when Indian consumers, especially Gen Next, are looking at to show of style as there is a growing disposable income among them. Galaxy Watch Active2 4G Aluminium editions is Samsung’s first smartwatch to be made in India.

“The Aluminium edition of Galaxy Watch Active2 4G is our most affordable 4G watch now. It’s also the first smartwatch to be made in India. With Galaxy Watch Active2 4G, we have also started manufacturing our entire range of 18 smartwatches in India as part of ‘Make for India’ program,” said Mohandeep Singh, Senior Vice President, Mobile Business, Samsung India.

Samsung claims to have put in place multiple sensors that help in tracking 39 distinct activities along with auto-tracking for popular activities, such as walking, running, cycling, rowing, elliptical trainer, dynamic workouts and swimming.

With the launch of Galaxy Watch Active 2 4G in India, the company claims it has become the first wearables maker in the country to offer two 4G LTE watches in India. But it is to be noted, that if you are planning on getting yourself the Galaxy Watch Active 2 4G, there are only two networks Airtel and Reliance Jio that currently support eSIM facility in India.

The products e-SIM connectivity helping you stay connected for calls, messages and notifications freely from the watch itself without having to keep your phone around. Users can access Social Media apps with just the tap of a finger, even while they are away from their smartphone.

The new watch makes it even easier to stay in the groove through Samsung’s partnership with Spotify. It allows users to easily browse through their music and podcasts on Spotify and enjoy an uninterrupted listening experience.

Taking into account the growing demand Samsung announced in June 2017 an investment of Rs 4,915 crore to double its manufacturing capacity for smartphones and refrigerators at its Noida (Uttar Pradesh) plant. In 2018, the company said it will double its annual handset production capacity to 120 million units by 2020 from the Noida plant.

IDC research report observes that the India smart wearables market clocked 80.6% year-over-year (y-o-y) growth to 4.2 million unit shipments in the March 2020 quarter. The research firm report also states that watches registered a y-o-y growth of 43.3% during the same quarter with about 2,09,400 watches being shipped in the country.