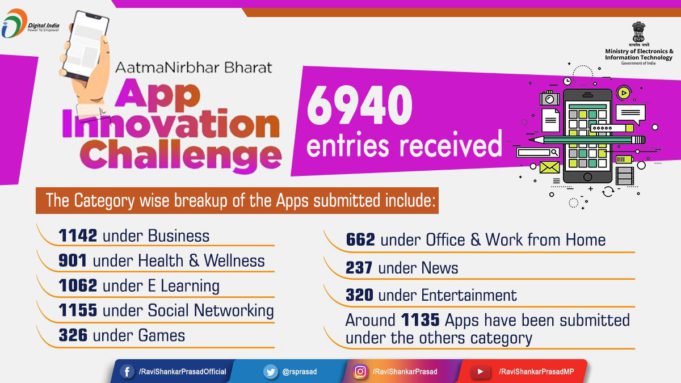 Hyderabad, NFAPost: AatmaNirbhar Bharat App Innovation Challenge, launched by the Prime Minister Narendra Modi on July 4 has seen a very enthusiastic response from tech entrepreneurs and startups from across the country, according to a statement from the Ministry of Electronics and IT.

The last date of receipt of entries was July 26, and a total of 6940 entries have been received across the eight categories identified.  These include 3939 from individuals and about 3001 from organizations and companies.

Amongst those received from individuals, around 1757 applications are ready to use and the remaining 2182 are under development.

For the apps submitted by organizations, 1742 apps have already been deployed and the remaining 1259 are under development.

Apps for a cause

The category-wise breakup of the apps submitted includes 1142 under Business, 901 under Health & Wellness, 1062 under E-Learning,1155 under Social Networking,326 under Games, 662 under Office & Work from Home, 237 under News and 320 under Entertainment.

Around 1135 apps have been submitted under the other category.  Around 271 of these Apps have more than 100,000 downloads with 89 of the Apps having million-plus downloads. The applicants are from all over the country including remote and small towns.

These numbers give an indication that talent and innovation challenge is best suited for young developers and entrepreneurs.

The true challenge, according to the Ministry statement, will be to identify the apps that are robust, scalable, secure with an easy to use interface and give users an experience that will make them come back to the app. Screening Committees have already begun scrutinising the app on various parameters.

The AatmaNirbhar Bharat App ecosystem has the potential to unlock value for the Indian tech startups and help them get a pie of the multi-trillion-dollar app economy. Just the top threw companies with maximum downloads of apps, this year have a total market cap of almost 2 trillion dollars and are growing very fast.