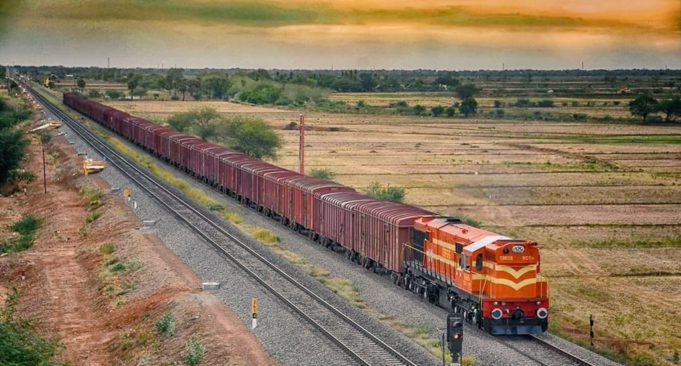 Hyderabad, NFAPost: Indian Railways has always been on the forefront, especially after the COVID-19 induced lockdown began. From running special trains to transport migrants to running time-tabled parcel special trains to even transporting commodities to neighbouring countries, Indian Railways has made sure to keep the Indian economy clock ticking.

As it was always, freighter traffic and earnings have been the bulk of Railways’ priorities. Despite, COVID-19 wrecking havoc, Indian Railways has achieved a significant milestone of pulling freight traffic ahead of last year’s level. On July 27 this year, the freight loading was 3.13 MT, notches higher than the numbers last year for the same date, according to numbers from the Ministry of Railways.

With the emphasis on the achievement of long term and far-reaching goals during the lockdown, Indian Railways has also completed nearly 200 infrastructure works in this period. And a milestone on freight transportation is a feather in Indian Railways’ cap.

The average speeds of freight trains have also seen a considerable increase. Although this can be attributed to the fact that passenger traffic has come to a grinding halt, maintenance of sections and increase in sectional speed has also played a defining role in speeds of freighters.

The freighters, on an average, have clocked 46.16 kmph, which is more than double as compared to last year for the same date (22.52 kmph).

In the month of July, the average speed of freight trains is 45.03 kmph which is around double as compare to last year for the same month (23.22 kmph).

On July 27 this year, the total freight loading was 3.13 million tonnes which are higher than last year for the same date. On the same date, a total of 1039 rakes took off, which included 76 rakes of foodgrain, 67 rakes of fertilizer, 49 rakes of steel, 113 rakes of cement, 113 rakes of iron ore and 363 rakes of coal.

It may be noted that these improvements in freight movements will be institutionalized and incorporated in the upcoming zero-based time table. These steps will lead to significantly higher freight traffic and earnings for Railways and cost-competitive logistics for the entire country.

It is also worth mentioning that a number of concessions/ discounts are also being given in Indian Railways to make Railways Freight movement very attractive.