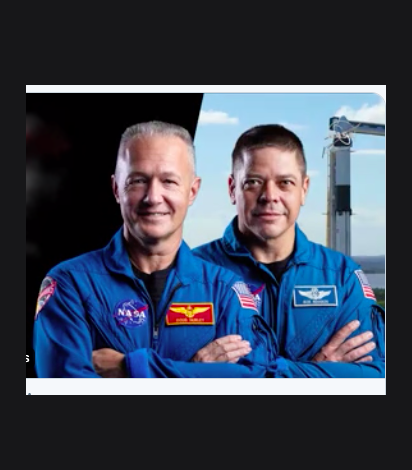 Elon Musk’s SpaceX mission made it the first private company to send humans into orbit and ending a nine-year gap in human spaceflight from the U.S.

According to NASA sources, the SpaceX Dragon Capsule carrying Doug Hurley and Bob Behnken came down in the Gulf of Mexico just south of Pensacola on Florida’s Gulf coast. Hurley’s and Behnken’s capsule touched the water at about 14:48 EDT (19:48 BST; 18:48 GMT).

The crew spent 63-days at the International Space Station (ISS)

A recovery vessel owned by SpaceX and named GO Navigator moved in to pick up the vehicle, parachutes and extricate the men. The touchdown marks the first crewed US water landing since the final outing of an Apollo command module 45 years ago.

Nasa administrator Jim Bridenstine said private boats which came close to the Dragon were asked to leave amid concern over hazardous chemicals on the capsule. He also said the presence of the boat “was not what we were anticipating”.

“What is not common is having passersby approach the vehicle close range with nitrogen tetroxide in the atmosphere, that’s not something that is good. And we need to make sure that we’re warning people not to get close to the spacecraft in the future,” he said.

Crew Dragon undocked from the ISS at 4:35 p.m. PT on Saturday, kicking off the crucial final leg of the crewed test mission that’s meant to prove SpaceX is ready to carry astronauts back and forth to the ISS on a regular basis. Crew Dragon had previously aced its uncrewed Demo-1 test flight back in March.

The splashdown followed a tense reentry process that put a lot of heat and stress on the spacecraft. Crew Dragon’s parachutes deployed as it closed in on its target and brought it gently down into the sea. Scorch marks on the capsule were a testament to the rigors of its return journey.

Hurley and Behnken were taken to a medical facility on the ship for initial checkups as part of the standard return procedures. They were scheduled for a helicopter ride back to shore.

Tesla CEO Elon Musk also expressed his happiness over the successful completion of the SpaceX mission and said that the return of the astronauts was something the whole world can “take pleasure in” as an “achievement of humanity”.

“No matter wherever you are on Earth, this is a good thing and I hope it brightens your day,” Musk said in a press conference after the Crew Dragon Capsule Endeavour splashed down the Gulf of Mexico.

United States President Donald Trump congratulated the team on the success of the two months-long mission. While taking to Twitter, Trump called the mission ‘very successful’ and informed that the astronauts completed the first splashdown in 45 years. The president even shared the moment when the capsule endeavour splashed in the Gulf of Mexico.

NASA Administrator Jim Bridenstine called it “a great day for the United States of America” in a post-splashdown press conference.  “We are entering a new era of human spaceflight where NASA is no longer the purchaser, owner, and operator of all of the hardware. We are going to be a customer — one customer of many customers in a very robust commercial marketplace for human spaceflight to low Earth orbit,” he said.