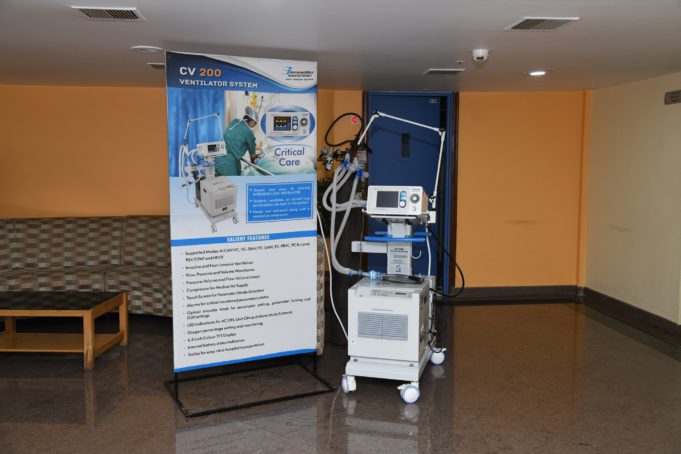 Bengaluru, NFAPost: Bharat Electronics Limited (BEL), a Navratna PSU under the Ministry of Defence, announced today the successful completion of manufacturing 30,000 ICU Ventilators in record time to help the Govt. of India (GoI) in its efforts to combat the COVID-19 pandemic. Ministry of Health & Family Welfare had earlier placed an order for these 30,000 ICU Ventilators in April 2020 to meet the healthcare infrastructure requirements of the nation, seeing the rise in COVID cases.

BEL has manufactured the ICU Ventilator, Model CV 200, based on licensing agreement with M/s Skanray Technologies Private Ltd, Mysuru, and design support from DRDO. The indigenization efforts of DRDO, BEL and Skanray in addressing the non-availability of critical components like highly complex medical grade miniature proportional valves, on/off solenoid valves, oxygen sensors and flow sensors was certainly a game changer as India can now boast of a capable and mature medical electronics ecosystem.

After receiving the order, based on its Agile Production System Capability, within two weeks BEL established the manufacturing line to produce 500 to 1,000 Ventilators per day.

Manufacturing of these ventilators was undertaken during severe lockdown period and BEL received immense support from various Government agencies to resolve the supply chain disruptions.

As manufacturing of these Ventilators was centred at the Bangalore Unit of BEL, the Karnataka Government took extra initiatives by earmarking a nodal IAS officer for BEL to liaison with, to resolve various lockdown related issues.

BEL also would like to make special mention of the support rendered by scores of Indian industries ranging from MSMEs to large business houses in supporting BEL towards manufacturing of 30,000 ventilators in a short span of time.

The valuable feedback received from the committee of expert doctors and hospitals pan India helped BEL to quickly upgrade the Ventilator with additional modes of operation through software to address Indian COVID patient needs.

Seamless coordination between the Central and State government authorities helped BEL in undertaking the installation and commissioning work expeditiously with the help of reputed private partners.

BEL would like to thank each and everyone who participated in this ambitious program. BEL, DRDO, Skanray and all other industry partners are proud to be part of the Govt. of India (GoI) initiative in creating a capable ecosystem for manufacturing medical grade equipment indigenously and timely addressing of the healthcare needs of our nation. This a true example of Make In India and Atmanirbhar Bharat initiatives undertaken by the GoI.

Addressing the press conference, Mr M V Gowtama, CMD, BEL, said that BEL was able to achieve this significant milestone because of the support of the DRDO labs which worked closely with BEL to provide the design and support from the various Government agencies.

He also shared how BEL needed to think out of the box to overcome many of the challenges, especially with regard to critical components, many of which were indigenised by DRDO labs and manufactured by Indian aerospace and defence companies.

Dr S Venugopal, Director, ADE, in his address, said that the manufacture of 30,000 ventilators in 4.5 months by BEL is not just a national but an international record. He commended the good leadership of Mr M V Gowtama, CMD, BEL, who led from the front.

Dr Upendra Kumar Singh, Director, CAIR, in his address, said this was a very good example of the excellent partnership among public sector, private sector and government agencies, especially during the time of crisis. He said everyone worked together for the nation.

Mrs Manimozhi Theodore, Director, DEBEL, in her address, pointed out the rigorous reliability and quality standards that have to be adhered to by medical electronic devices and how Indian vendors were able to rise to the occasion and deliver.