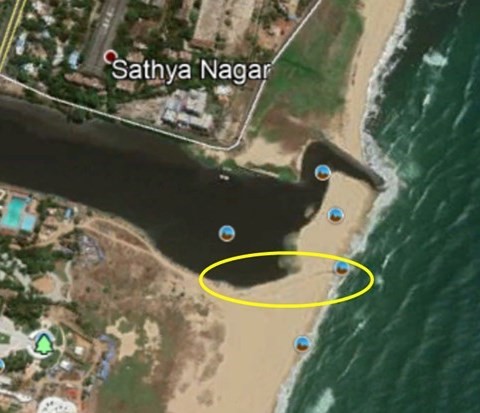 Chennai, NFAPost: Indian Institute of Technology Madras Researchers have studied flooding in and around Chennai and have proposed the construction of ‘Straight Training Walls’ at the mouth of Ennore Creek in order to minimise the flood risk significantly on its upstream.

The study focused on extreme storm surge scenarios and high tide levels along with flooding in the river. It found that heavy siltation in the creek mouth and narrow opening in the mouth posed a flood threat to the areas adjoining the river.

The study showed straight training walls at the creek mouth and some regular de-silting of the river will improve the situation and minimise the flood risk significantly in North Chennai. It also showed that an alternative proposal of curved training walls proposed earlier will worsen the situation, by blocking the free exchange of Seawater with the creek, thereby, increasing the flood risk.

The Study was commissioned by Kamarajar Port (formerly Ennore Port) in Chennai to propose solutions to reduce flooding around Kosathalaiyar riverbanks. It was undertaken by Prof. K Murali, Prof. SA Sannasiraj, and Prof. V Sundar, faculty in the Department of Ocean Engineering, IIT Madras.

IIT Madras, Department of Ocean Engineering, Prof. SA Sannasiraj said, “Based on the expertise and experience of the Department of Ocean Engineering, IIT Madras, the Researchers working with training of river mouths, the proposal has been made to construct a pair of training walls extending perpendicular from the shore up to a water depth of -5m on either side of the creek.”

IIT Madras Department of Ocean Engineering Prof. V Sundar said, “A straight structure with sufficient crest height is essential to ensure the tidal prism ingress for flushing. Further, in the event the shoreline south of southern training wall reaches its tip, either dredging or its further extension into a water depth of 6 to 7m is feasible with ease. Further, the straight training walls would act in complement with the present series of groynes which were designed by IIT Madras for shore protection too.”

In the history of flooding in and around Chennai, the three creeks – Adyar, Cooum and Ennore – remain as major bottlenecks due to sand bar formation at their mouths, this results in significant flooding over the settlement along its banks, impact on coastal villages, disruption in fishing activity, industrial network on the upstream, road encroachments and illegal waste disposal.

IIT Madras Head, Department of Ocean Engineering, Prof. K Murali said, “Several earlier attempts that were made towards the prevention/reduction of sand bar formation at Cooum mouth by constructing a pair of training walls have not yielded the required outcomes due to various reasons.”

He added that the major reason is due to the inclination of the southern training wall with shoreline that hinders flushing of sediments effectively into the sea particularly during the non-monsoon seasons. Fixing a lower crest elevation much less than required allows the sand moving along the coast termed as ‘littoral drift’ pass over it and deposit in the mouth.  These serve as lessons to be learnt from the past mistake.

The Ennore creek is located at about 1 km southward of the Kamarajar Port at Ennore, Chennai. Historical imagery showed that the inlet width varies seasonally depending on the net longshore sediment transport rate due to waves that vary monthly and with the occurrence of cyclone as well as rainfall.

In a well-balanced ecosystem/environment, the mouth of the inlet should remain open and continuous exchange of water is to be ensured. Owing to the large volumes of sediments transported along the bed as well as suspended in water, such inlets act as a sediment sink resulting in sand bar formation. Like a chain reaction, the hydrodynamics are altered; the inlet stability fails; and, flooding on riverbanks follows, IIT Madras study says.

The comprehensive report of IIT Madras examined different possibilities of extreme event cases both from the land and the Sea. The studies reveal that it could lead to an overflow in the region of elevation lesser than 2.71 m with respective MSL. A detailed study for the Adyar and Cooum estuaries will also be taken up for investigation by IIT Madras.