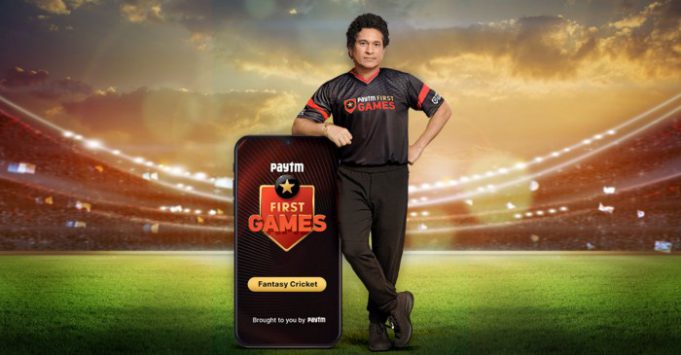 The icon of a billion cricket-loving Indians, Sachin would be instrumental in creating awareness about the exciting genre of fantasy sports in the country.

Other than Fantasy Cricket, he would help PFG promote and generate excitement around all sports including kabaddi, football, and basketball. Paytm First Games is among the leading fantasy sports gaming platforms in the country and the partnership with Sachin will increase its reach in smaller cities and towns.

For millions of Indians, Sachin Tendulkar’s journey has had a deep impact on their personal lives. He has been the sole inspiration for many to play, watch, and believe in cricket, more as a religion than just a game. By welcoming Sachin Tendulkar as the brand ambassador, PFG hopes to inspire gaming enthusiasts to experience the fantasy sports phenomenon.

The company has also set aside Rs 300 crore for investing in growing the market for fantasy sports and other online gaming events during this financial year. In the coming six months, the platform would also feature 200 plus live events including international and domestic cricket tournaments, soccer leagues and more.

Commenting on his appointment, Paytm Founder and CEO Vijay Shekhar Sharma said Sachin represents the dreams and aspirations of a billion-plus people.

“He is the pride of our country and the true embodiment of excellence, tenacity, and hard work. This association is based on many of the values we share with the greatest sportsperson of all time. Just like Sachin, we believe that country comes over everything else, followed by the company and finally team. We hope that together we inspire millions of citizens to follow their dreams and achieve greatness,” said Paytm Founder and CEO Vijay Shekhar Sharma.

Expressing happiness over the development, Sachin Tendulkar said cricket is an engaging sport, and all tends to have opinions about the game — right from player selection to playing strategies.

“Paytm First Games will give fans the opportunity to don their thinking hats and experience the thrill of making the correct choices and getting their teams to win. I am happy to partner with Paytm First Games to enable cricket fans to engage more with the ever-popular game of cricket,” Sachin Tendulkar.

Paytm First Games Chief Operating Officer Sudhanshu Gupta said cricket is like a religion in the country which inspires over a billion people and fantasy sports takes the fan’s level of engagement to the next level where the user experiences the thrill of playing along with the athletes.

“As India’s homegrown gaming platform, our vision is to get the sports fans closer to the action with fantasy sports. Most of us have grown up watching the Master Blaster in action. With Sachin as a brand ambassador, we wish to inspire mobile gaming enthusiasts to experience fantasy sports which are about tactics, strategic planning and research,” said Paytm First Games Chief Operating Officer Sudhanshu Gupta.

Paytm First Games offers over 50 games on its platform. The most popular genre is fantasy sports where players apply research and strategy to engage with live sporting events. It currently engages over 80 million gaming enthusiasts with the majority of them from smaller cities and towns.

Paytm First Games, is looking to tap South Asian markets and has partnered with Alibaba-owned online marketplace Daraz to launch a new gaming app in Bangladesh – Daraz First Games. Paytm First Games claims that it has more than half a million daily active gamers on the platform, spending anywhere between 32 to 45 minutes playing more than 100 games.

The app’s popular games like Ludo, Block Puzzle, Retro Tetris, 3D Highway Racer, Crazy Shooter, Candy Match and Ninja-Duo. According to Arvian Research, the lockdown has really spiked its customer reach as it witnessed over 75,000 new users are joining per day.

Introducing Your New Home for Work in G Suite