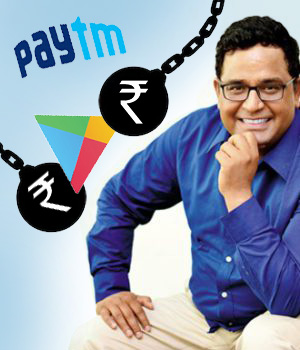 Paytm is back on Play Store; Google had removed it for UPI cashback & scratch card promotion

Bengaluru, NFAPost: Paytm Founder Vijay Shekhar Sharma said Google’s decision to remove the app from Play Store is a one-sided action by the global tech giant and it challenges the whole concept of Aatma Nirbhar Bharat for the app ecosystem in the country.

In an interaction with NFAPost, Paytm Founder Vijay Shekhar Sharma said this is a way to arm-twist companies that are innovating for India.

“It also thwarts the government push to promote digital payments with UPI as the cashback which is given on Paytm is directly credited as UPI. The same campaign is running on several app. Your data has been truncated,” said Paytm Founder Vijay Shekhar Sharma.

Paytm Founder Vijay Shekhar Sharma also alleged that Google didn’t give time to give the reason for its decision to engage with cricket fans in a country where the sport is considered the most loved game.

In a dramatic turn of events, Google removed on Friday Paytm app for few hours from the Google Playstore and brought it back for alleged policy violations. The global tech giant came up with the reason that India’s homegrown financial services company Paytm ran promotional UPI cashback campaign and scratch cards which it found as gambling.

However, Paytm squarely blamed Google for this reasoning as a double standard and said that giving cashback is a standard industry practice followed by all major players, including Google Pay.

“The US-based tech giants has doled out millions in cash back to gain market share in India,” states Paytm sources. The Noida headquartered Paytm is the country’s largest payments app and competes with Google Pay in digital payment space along with Walmart owned PhonePe and others.

“There is a bigger question here that the Indian startup ecosystem and developers should think about. As a startup, we are running law-abiding businesses and building for India. Google and its employees are making policies which are over and above the laws of our country, and are arbitrarily implementing them.“

Paytm also came up with some questions about whether there previous policy violation and communication from Google. The company made it clear that the Google Play Support team had written to the company on 3 occasions (on August 20th, August 28th and September 1st) with some concerns on a separate matter of Paytm First Games’ promotion through the Paytm app.

“While we strenuously disagreed with the allegation that we are breaching the policy (and we disagree with the policy itself too), we immediately complied with the diktat that barred us from promoting our gaming subsidiary,” states the company.

The Google Play Support team had written to us on 3 occasions (on August 20th, August 28th and September 1st) with some concerns on a separate matter of Paytm First Games’ promotion through the Paytm app. While we strenuously disagreed with the allegation that we are breaching the policy (and we disagree with the policy itself too), we immediately complied with the diktat that barred us from promoting our gaming subsidiary.

Paytm lambasted the Google decision to ban its ban and stated its wish to make it clear that driving traffic or promoting fantasy sports is not gambling.

“Conveniently, Paytm First Games can do a paid promotion on YouTube (which is owned by Google), but it is not allowed to do the same advertisement on the Paytm app, as per Google Policy,” states Paytm.

Paytm said the company had been prompt and responsible in solving Google’s concerns and comply with their directions.

“Google’s recent action on de-listing Paytm app because of a cashback campaign is unjustified. We reiterate that our cashback campaign was within guidelines, and there was no violation. We are thankful to our users for their unwavering support to us. As a pioneer of the digital payments ecosystem in the country, we will continue with our efforts to present what is right with conviction and strength,” states Paytm.

At the beginning of this Cricket Season itself, Google Pay has started its ‘Tez Shots’ campaign which clearly says, “Score Runs to earn assured rewards worth up to Rs 1. lakh.”

According to the steps of the game, a user can play as many times as they want. They earn vouchers that they can unlock at each milestone. Finally, they qualify for a lucky draw through which they get assured tickets up to Rs 1 lakh with any qualifying payment.

For different scores starting from 50 to all the way to 1000 plus they also earn rewards and discounts on different services that they avail via the Google Pay app. Paytm alleged that such cashback campaigns of Google Pay are not in breach of Play Store policies, or maybe they are, but a different set of rules apply to Google’s own apps.

Paytm has recently launched the ‘Paytm Cricket League’ for users to engage in their passion for cricket and get cashback. The game allows users to get player stickers after each transaction, collect them, and receive Paytm Cashback.

On Friday afternoon, Google intimated Paytm that they are suspending its app because they believe this to be a violation of their Play Store policies on gambling. Subsequently, Paytm app was unlisted from Google’s Play Store and was temporarily unavailable to users for new downloads or updated.

On September 18 at 11:30 am, Paytm received an email from Google Play Support informing that the Paytm Android app had been delisted. Their email stated:

“Your app contains content that doesn’t comply with the Gambling policy as it offers games with “loyalty” (e.g. engagement or activity) points that (1) are accrued or accelerated via real-money purchases which (2) can be exchanged for items or prizes of real-world monetary value,” states Paytm in its blog post on the reason from Google for banning the app from Play Store.

The company also stated that the email also shared by the attachment which showed screenshots with its concerns highlighted.

Google owns Android which is the operating system on which over 95% of smartphones in India run. Google, as a result, has enormous control over which apps you download through its Play Store policies.

It also makes billions of dollars in advertising revenues from the Indian startups that make these apps. In many cases like maps, email, payments, shopping, cloud storage, etc, Google also has apps that compete with other apps, including, of course, the apps that are made by Indian startups.