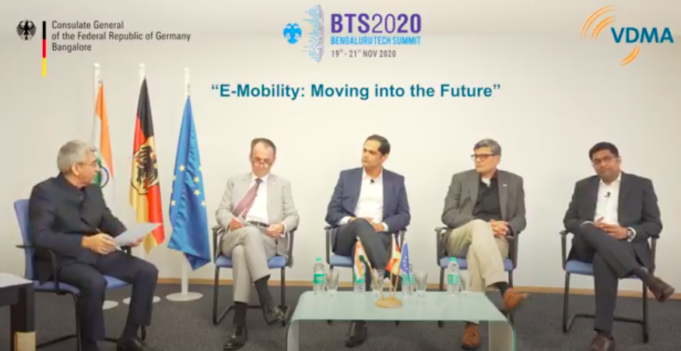 Bengaluru: German Consul General Achim Burkart said there is a 500 billion dollars global opportunity in e-mobility in the next five years.

The panel discussion on ‘e-Mobility: Moving into the Future’, Achim Burkart said we have a consensus that there should be a cohesive work environment where both government and private industry should play a proactive role.

“E-mobility is a very crucial topic because it is about our common future and also there is a $500 billion opportunity. The EV initiative should be led by both public and private participation. I would say the government can frame policy and the other part the business led by the private companies should take care of on what will happen on the ground. I should say there should be close cooperation,” said German Consul General Achim Burkart.

He highlighted the fact that the German government set a big role in this mobility space by setting the tone and the trend-led by former German Chancellor Angela Merkel.

“Angela Merkel has set that 2020 there should be 1 million vehicles. I feel there is a back log in this because of the Covid pandemic. Also, the government also created the German National Platform Electric Mobility is set up by the German government,” he said.

Expressing a similar view, Siemens Technology & Services Pvt. Ltd CEO & MD Pankaj Vyas said rather than piecemeal approach India should come up with policies that will help in building a solid ecosystem for the successful adoption of mobility.

“We should come up with an ecosystem for the emobility in the tech space, building up the manufacturing base, battery suppliers, charging stations and overall digital infrastructure to support for the commercial aspect,” said Pankaj Vyas.

“Government has already invested in capacity building in conventional vehicles. Now we have to make a smooth switch from conventional to EV. It is the reality that government, both centre and states, are doing a lot as they have realised policy is needed,” said Dattatreya Gaur.

He also pointed out that electric vehicle is a long furlough game and central government’s FAME 1 is already over the new FAME 2 is well looked at to take care of both supply and demand-side.

“We can also see government initiatives on rebates for purchase. There is also ease of doing business for establishing the manufacturing plant. Some tweaking should be made in the upfront cost of vehicles as it is very high. It can be done by decoupling it with battery. Now vehicle can be registered without a battery and there should be battery subsidy also,” said Dattatreya Gaur.

“Within the city, the route can be set up to some periphery of the city and it is less challenging for putting infrastructure. On the predictability front, the impact is on personal mobility and we know that India has already sold more than 100,000 two-wheelers,” said Manu Saale.

Then the next set of change in the predictability front is the vehicle that will come to operate for public transportation and the third category is the trucks which will be used for garbage, other material movements etc.