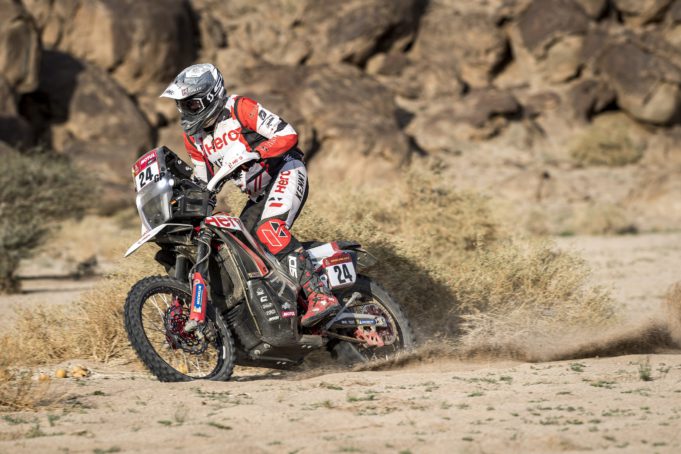 Hero MotoSports Team Rally posted a steady performance in the penultimate stage of the Dakar Rally 2021. Both riders are now in the Top-15 in overall rankings.

The riders tackled the stage confidently and completed it without any major incident. Sebastian Buhler kept it steady and concentrated hard to avoid any mistakes at this critical juncture in the rally. He got rewarded for his discipline and perseverance with a 12th place finish.

Joaquim Rodrigues also started the stage really well to get into a good pace and rhythm until right at the very end of the stage he missed a waypoint. Besides losing time, he also attracted a time penalty for missing it, thereby finishing the Stage 11 on 26th place.

With only the last stage separating it from the finish line at Jeddah, Hero MotoSports Team Rally is poised for a strong finish with both Joaquim and Buhler placed on 12th and 15th places respectively in the overall standings.

The last stage of the Dakar Rally 2021 tomorrow will provide one last opportunity to riders, albeit a short one at 225 competitive kms, to make one final dash to the finish line in Jeddah.

Joaquim Rodrigues (Competitor No. 27) said he tried to take it easy and make it to the finish line as the team is very close to completing the rally.

“Everything was going good for the most part of the stage, I had good pace and rhythm. But just 20km before the finish I couldn’t find a waypoint. I kept looking for it till I reached a point where I started running low on fuel, and then I decided to move on. Lost a lot of time there but I made it to the finish so I am happy with that,” said Joaquim Rodrigues.

Sebastian Buhler (Competitor No. 24) said as a very long stage with some difficult and dangerous zones he tried to relax and concentrated on not making any mistakes.

“Towards the end, there was difficult navigation where I just slowed a bit and tried to focus on doing everything right which worked well for me as I didn’t lose too much time there. For the last stage, my plan is to approach it like the first stage because the race is not done until you cross the finish line,” said Sebastian Buhler.

Provisional Overall Rankings at the end of Stage 11